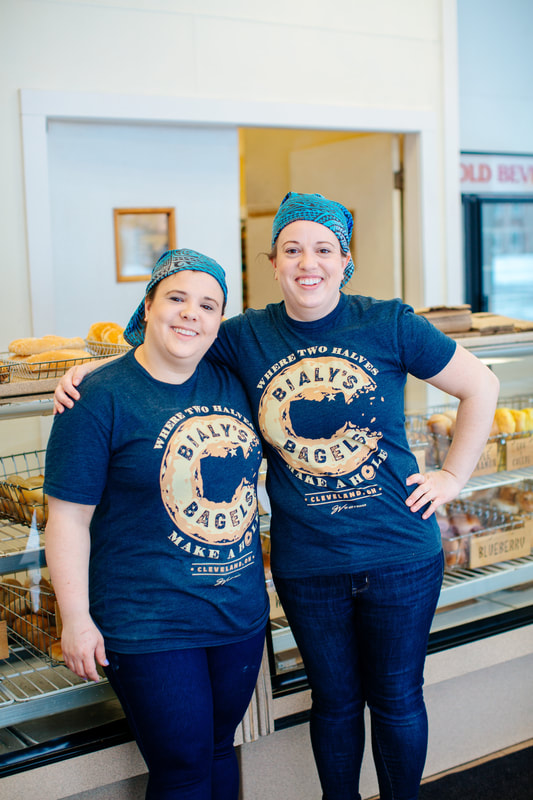 Twins Rachel and Sarah Gross were born in University Heights, OH in 1984.

brother to Bialy's.  They didn't know it then but, they would eventually take

over this Cleveland landmark.

While visiting the Bagel Station, owned by their uncle in Winston Salem, NC,

their love for bagels grew. Rachel and Sarah eventually traveled to NC in 2011

to learn the ins and outs of the bagels business.

In 2014 with no luck of opening their dream bagel shop, they launched Clover

Road Cream Cheese. Although it is not in production at this times Rachel and

Sarah hope to bring it back.

In December or 2017, Rachel and Sarah finalized the transfer of ownership of

They hope you will continue to follow them on their journey.

served in the U.S. military during the Korean War. He also worked as a

baker in Manhattan.  Skolnick decided to open his own bakery in

Cleveland, in order to seek out an untapped market.  After moving to

Cleveland, he looked in the phone book for a Jewish last name and called

to ask where he should open his business.

Skolnick retired in 1997.  Skolnick's daughter, Ellen Osolin who owned and

hours to make that business what it is and to pass that on to us.”

​their 2 daughters and grandchildren. Osolin said, "We are thrilled to pass

the business to born and bred Cleveland twin sisters. We wish them

nothing but success in the future . We hope all our customers will

continue to support Bialy's, and hope they will bring in some new


Cheers to the next 51 years Cleveland!